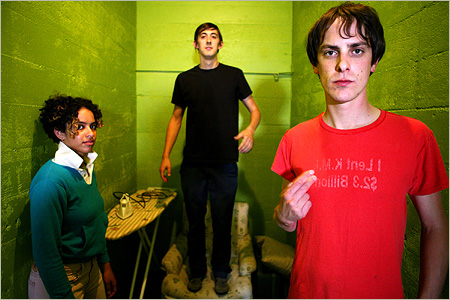 They’re not the brightest bunch in the scene, but although their music can often be a bit depressing, The Thermals‘ eerie melancholic sound certainly has its special charm. The band’s new album, their forth, titled “Now We Can See” is out this week and sorta follows in their previous albums’ footsteps, despite they drafted a new drummer and moved to a new label. They’re still ‘post’ too.

“It’s totally post-power-pop. We know, we’ve done the whole “post-” thing before (see our 2006 opus The Body, The Blood, The Machine, a true post-pop-punk classic). We should really be so post-”post-” at this point. But we’re not. Do you know why, dear reader? Because adding “post-” to any genre AUTOMATICALLY MAKES YOUR MUSIC SOUND SMARTER. Actually, adding “post-” to ANY WORD OR PHRASE immediately makes you “over” it, and therefore better than it. Go ahead, try it! Don’t forget to thank us when yr ass is post-broke…

…We think it’s pretty good! Pret-ty, pret-ty, pret-ty good. Not only are the songs filled with some of our smartest lyrics and sweetest melodies, but the recording is, for us, another great leap in fidelity (you might even call it hi-fidelity), thanks to producer John Congleton (Explosions In The Sky, Polyphonic Spree), who brought massive amounts of sound and bombastic style to the project.”

Check out their first single in MP3 and video format bellow – a lovely song packed with Thermals classic chants and catchy hooks. The band’s also been a massive act down at SXSW this year, so if you’ve got the chance,  don’t miss them live (some April dates attached).