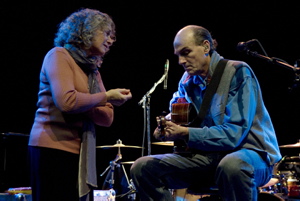 The reuniting saga has not stopped. But this time it is something different. They are not in the spot light as Spice Girls or Eagles were but James Taylor and Carole King are two very talented musicians and they have been making music for the soul for about forty years.

Taylor and King were a match made in 1969 at Hollywood’s famed Troubadour nightclub. They were rehearsing there Tuesday afternoon for a series of benefit concerts coinciding with the club’s 50th anniversary. He reached the top of the Billboard pop chart in 1971 with “You’ve Got a Friend,” who was written as you could guess by King. In fact she performed the song on her Grammy-winning “Tapestry” album.

“I was standing right up there,” Taylor, 59, recalled, pointing over to the bar. “And I would listen to Carole play it every night. I was working it up on guitar. She heard me playing it, and she said, ‘You should cut that. That sounds real good.’ “

King and Taylor had worked together in New York City but their 1969 Troubadour debuts were significant. “It is the first place that we played as two separate acts,” King, 65, told The Associated Press. “Before that, I had been playing backup for James, and James had nudged me forward to be my own performing artist.”. But surprisingly after that they rarely performed together.

“Carole and I bump into each other all the time,” he said. “We end up doing benefits together, or different kinds of efforts, and we always say to each other, ‘We’ve got to get together and play again.”‘ For the artists who have filled halls for decades this could be a way of returning to the intimacy that comes when playing for just a few hundred people in a venue such as The Troubadour.