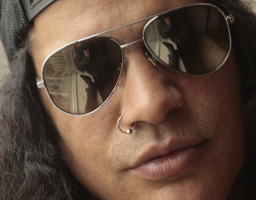 The fact is that the Guns are attracting massive publicity but they have not released anything for a long time. Numerous rumours have been started which are more or less true. A big part of the fans are interested in that so former Guns guitarist, now at [tag]Velvet Revolver[/tag], Slash wants to put things in the light with an autobiography.

“It was the only format that I could find where I could get some of the facts straight about Guns N’ Roses,” he says, pointing out that the media is responsible for most of the misconceptions. “A lot of the stuff that’s been going around is just wrong, and people have been asking me a lot of stupid questions. “I would never write an autobiography just to talk about myself,” he goes on. “That’s not my personality. But it got to this point where, because Velvet Revolver (the band he formed in 2002 with ex-Gunners (bassist) Duff McKagan and (drummer) Matt Sorum, Stone Temple Pilots vocalist, Scott Weiland, and veteran rhythm guitarist, Dave Kushner) is so high profile, and I’m doing so much press with them, I’m faced with having to deal with Guns N’ Roses stuff 20 per cent of the time. “So I said, ‘Let’s do a book and I’ll get all this s— straight.'”

According to him he is just saying the story as he lived it. Starts from the early days and covers the bands he played in and what he did but there are some things he left out. “It shows where I come from, how I started playing guitar, the different types of bands I was in, but it’s probably only about half of what really happened,” he says, flashing a smile “It’s not the whole story, but it does explain the Guns N’ Roses thing and it’s clear cut. It’s my side of it.”. Reminding himself of the Guns glory days is flattering and annoying at the same time. “It wouldn’t be annoying if the band was still together, but I quit Guns going on 12 years ago.

He remains very lucid throughout and recounts the recording of “Appetite” and the group’s massive follow-ups, “Use Your Illusion I and II.” He even lets us in on an incident when he tried to get Axl Rose (the band’s frontman) to change the lyrics to “Paradise City.” “I wanted him to sing, ‘Take me down to the Paradise City where the girls are fat and they’ve got big titties,'” he says. Not going to cover his fight with drugs here as enough talk has been done around that and in fact we are interested in the artist and not the man. Which brings us to the ill-fated “Chinese Democracy”. When Axl says it is going to see the light of day nobody even listens. But to hear that from Slash is interesting to say the least. “It will come out,” he says. “The ‘Chinese Democracy’ thing does not surprise me. But, I have to defend Axl. Whereas I’ll go out on a limb and I’ll put a band together, he has been faced with the daunting task of having to find and replace what was organically one of the best rock n’ roll bands ever. “That’s not an easy job.”. It is not.