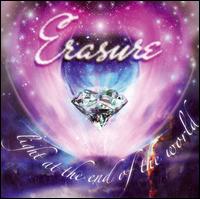 They did it all and not for a short while. The good news is that after giving themselves room to roam with an acoustic album, a cover album, solo albums, and a slew of live albums, Erasure return to their comfort zone of distrust, disgust, and despair set mostly to a disco beat with the occasional ballad. The same closed which should be cleaned but more maturity.

The Light at the End of the World album style has a lot to do with Andy Bell‘s love affair with complete disclosure, which began with the late-2004 announcement that he had long been HIV positive. He talks vividly about the bittersweet taste of freedom that comes afterwards in “Storm in a Teacup”. His mother’s alcoholism influenced the song, but he keeps growing as a songwriter and is smart enough to adapt and make something worth listening even without the story behind it.

“Tracks like Teacup”, “How My Eyes Adore You” and “When a Lover Leaves You” are touching and soft but there is some balance with “Sucker for Love” which is a rump bouncer with wonderful Bell declarations.

Vince Clarke‘s music has evolved since [tag]Erasure[/tag]’s debut you won’t hear it here, but with so many hooks and tight arrangements the album is one of the best “go with what you know” arguments since AC/DC. They can walk the walk. True band and they nailed it and brought better songwriting along for the ride.