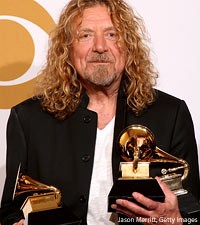 Not really. Seeing how I live in a totally different time zone, I preferred a good night’s sleep, than to risk loosing a few precious hours of life on a load of hip bullshit. I woke up in the morning, read Stereogum’s live blog from the event as well as a few twitters (Diplo was hilarious!),  afterward I conveniently had my ham and egg breakfest. Yeah, there goes another one, I say, while I devour a piece of omlet, with a fugitive sip of orange juice in between mouthfuls.

Around late last year, when the nominee list was first announced, I was pretty much hopeful for a decent edition (finally. not), since quite a few unconventional Grammy names were mentioned, like M.I.A. or Hot Chip. A maneuver most likely to attract a younger audience in front of the TV. Pop stars still reigned high and gained a myriad of golden gramophones.

Robert Plant and Alison Krauss, quite deservedly, won the most awards last night, winning in every nomination, four to be more exact, including  Record of the Year and Album of the Year. Runner-ups include Lil Wayne, who won awards for Best Rap Album and Best Rap Song and Coldplay that took home  Song of the Year for “Viva La Vida” and Best Rock Album. Worth noting is that M.I.A. didn’t left home emptyhanded grabbing the Best Outfit award. If you’re more interesting in who and what won, check out the full list here.

Bellow you can check out a few (quite a few) of the most interesting moments from last night’s Grammy Awards, including Radiohead‘s performance of “15 Steps” with the USC Marching Band and U2‘s rendition of their latest single, “Get On Your Boots.”