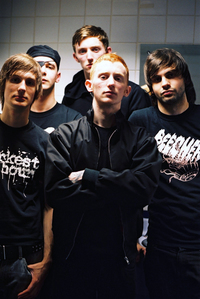 Watford punk act [tag]Gallows[/tag] are set to prove that punk’s not quite finished yet and are preparing the release of a new single: “In The Belly Of The Shark“. The track’s off their debut album “Orchestra Of Wolves” and is set to be in a store near you on September 17 in CD and two 7″ singles(it includes a cover of Hot Snakes’ ‘If Credit’s What Matters I’ll Take Credit’). The singles sounds as aggressive and punkish as it could get and will certainly make due for all you punk and Gallows in general fans.

Also if you want to catch the Gallows live(one of the most spectacular punk bands live) here’s some dates you can find them on: