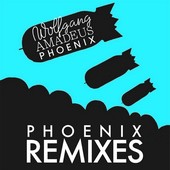 Forget what Chinese astrology might tell you, 2009 is the year of the Phoenix! After delivering what can only be described as almost pure pop perfection, in the form of their last record “Wolfgang Amadeus Phoenix“, and  becoming the most remixed band of the summer, it’s pretty clear the band is at the top of its game.

We posted a few remixes before, really great ones too, but you’ll probably find the best ones on the recently released Wolfgang Amadeus Phoenix (Remix Collection), that features remixes of Phoenix by the likes of Animal Collective, Devendra Banhart, Alex Metric or 2 Door Cinema Club. The Remix Collection is out today, digital release only, on Loyaute/Glassnote Records and it’s now available for free streaming in this entirety down at CBS Radio.