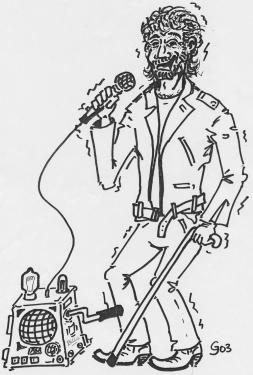 As of today every Wednesday we are going to write an article about something funny or what we think is funny or just what we think you would find interesting. It could be fascinating or just damn silly but in case you smile just a bit after reading the article or during the time you read it means we did it right.A few months ago I had the opportunity to go to a Rolling Stones concert which I passed not because of their age or something but because quite frankly I have never been a fan of theirs. Just about everybody was making jokes about their age (some were actually pretty good but that is not the point here) and it turned out to be a fantastic gig thanks to the band which played very good and also thanks to a big part of the audience which was very enthusiastic and I was thinking that 50% of a good concert is the audience. Just think that you have and extra band member which is represented by 50.000 people singing in the background.

Those who think a concert is going to be lame should just stay at home in the first place; and there is another category which should stay at home. Yes I am talking about those which are too old; now this in fact is not about old at age but rather old at spirit. In case you still cannot tell how somebody could be too old to go to a concert well here are the signs:

– You think the music is too loud
– You complain about the ticket price…
– …Then you ask if you can use your senior discount card
– You won’t go to a concert if it’s on a week night
– You only show up to see the headliner band…
– …And then leave 20 minutes because you have to work the next morning
-You’re older than all the bands performing (this really hurts when Rolling Stones is performing)
– Crowd surfing is now replaced with you being carried out into an ambulance for getting hurt by trying to crowd surf
– You won’t go to the concert if it’s over a half hour drive
– You stop kids from doing drugs and then rat them out to the club employees
– You go to shows just merely to take photos of bands
– You’d rather watch the concert on DVD
– You’re more concerned with an important baseball game than the actual concert…
-…And hope there’s a TV that broadcasts the game
– A nap is needed for you to attend a concert
– You wear t-shirts of a band that was relevant 50 years ago OR
– You are glad you kept a t-shirt of that band even when they split up because they got back together 15 yearss later
– You spend the whole show checking your watch, for two reasons: You have to take your pills on time, You don’t want to miss “Matlock”
– You ask for an autograph on your boob and the band member mistakenly signs your knees instead
– You still think tie die is cool *cough* me *cough*
– You like to stand by the bar, not because you can get a drink easily, but because it’s something to lean on
– You actually attended an Elvis Priestley concert
Well at this point you might be asking yourself how do you know you are not too old; here is how you know.