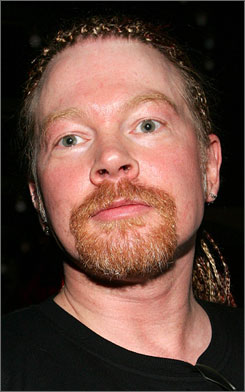 Well mates, concerning this record I’ve heard pretty much anything that could be imagined, and even more. It seems to be just an illusion, closing in on you and making promises only to dissapear again in the shadow of Axl’s dark robe. His children, led by Buckethead, seem ready to continue the music, but the dark man himself is not ready.

Will it be good? Will it be bad? Those answers don’t make sense anymore. Will it ever see daylight ?! This seems more appropriate. Now you’ll never guess what is the latest idea about this album.

A source close to the band Guns N’ Roses have told the TheSpoof.com that the new Guns N’ Roses album “Chinese Democracy” will be in fact a bluegrass album. Awww man, I love bluegrass, but GNR singing it ?! I would rather listen to eminem singing some Christian pop, it would be a little more authentic.

“This is shocking,” says fan Billy Walters. “I can’t believe GN’R would do that kind of album, it will be a real disappointment to a lot of long time fans.”

Yeah, we won’t be thrilled about it. But still, there is hope! The label has only said “No comment.” Now to say the least… there are some rumours about Axl gone mad (gollum style… my chinese precioussss), but a bluegrass album is just crazy even for him. I didn’t think I’d say this but… It would be better to wait than to release this sort of album.