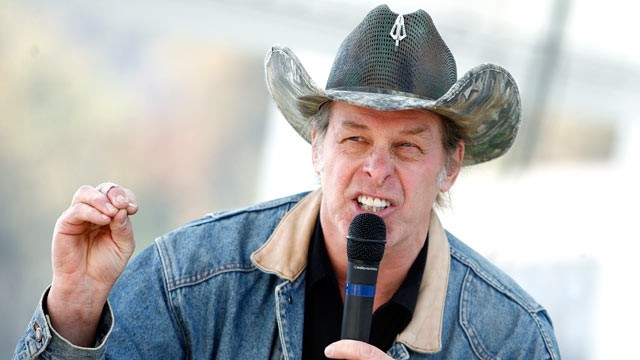 So Ted Nugent, everyone’s favorite right-wing has-been musician, said something stupid.  Doesn’t seem that newsworthy.  Or something that the Secret Service would look into.

Mostly, that’s the case.  The man could reasonable be called mentally unstable.  So it shouldn’t really be a shock that he said something the SS interpreted as potentially threatening to President Obama.  And I quote…

I’ll tell you this right now: if Barack Obama becomes the president in November, again, I will either be dead or in jail by this time next year.

He said this out loud, which is stupid enough.  He’s a celebrity, which makes it more stupid.  But it’s especially stupid when a celebrity potentially threatens the President on television.

The best part?  He’s actually surprised that the SS is investigating his comment.  He told Glenn Beck that,

Is that right?  Well, it’s that’s true, then why would you be dead or in jail if Obama gets a second term?  Ya know, other than making an attempt on his life.  There’s no conceivable reason – that’s the answer.

Better still is Nugent wondering why anyone takes anything he says and casts it in a negative light.

I mean, it’s just insanity how they immediately reduce everything I do to homophobic, sexist, racist, and shameless self-promotion.

Yeah, totally.  Calling the President and his cabinet “criminals” and that “our government is wiping its ass with the constitution” is nothing more than misconstrued comments spun in a negative manner.  Totally.

Anyhow, he’s apparently meeting with them tomorrow (April 20).  This should be good.