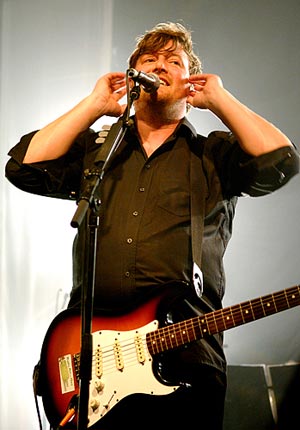 In a recent talk with BBC Radio 1’s Newsbeat, Elbow frontman Guy Garvey lashed out on people who can afford to buy music, but choose to rip it, saying they’re “going to hell” for it.

“If you genuinely can’t afford music then of course you’re going to rip it. If you can afford it and you don’t pay for it then you’re going to hell and you’ve got your own room. Especially when it’s a smaller band. There’s no excuse.”

This came into discussion after being asked if he was worried about the leak of Elbow’s follow-up to the incredibly commercial and critical success “The Seldom Looking Kid.”

Should illegal downloading be  seen as cruel and unjust as theft? I guess it all depends on what inclined one to proceed this way, but I generally agree with Guy (without the hell part of course; i’ve had my share of downloads…) – if you enjoy a band’s music, support it, buy the goddamn album!

Being in the scene for over 20 years now, Guy also took the time to say a few words about the band’s relationship to labels.

“You come across people [record labels] who’ve dropped Elbow all the time. If you throw a rock in London you’ll hit one. We’re lucky to have a paymaster in the current climate. It’s not lost on us.”

If you look at how the music scene has changed today, you’ll see a swarm of new bands who have managed to reach stardom and commercial success thanks to the internet by tapping through social media channels like blogs, myspace, facebook or youtube, but at the same time, yesterday’s bands are dying of a gruesome death. It’s all about adapting, but at the end of the day truth be it, a few gigs a year won’t pay the bills. Some kind of solution must be reached or else we might have to deal with the professional musician trade slowly dying off . Educating the audience is of crucial importance, thus, seeing a lot of people have grown to take music for granted, especially young folk, and it’s up to every artist, big or small, to do something about it. [via spinner]