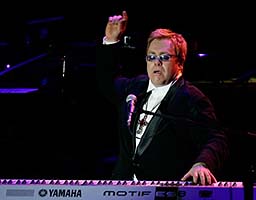 You should not think of something very fancy. In fact should you guess what award he received would mean you should consider playing the lottery. [tag]Elton John[/tag] has received a specially made bird-feather cloak for his many visits to Maori communities.

The man is known for his fabulous music but for other things as well. His personal life aside there are very few things he could be blamed for; in fact he has been involved in numerous wellfare acts and charity. Now let us shed some light about the award.

“It’s the Maori equivalent to an Academy Award” and means the 60-year-old British singer is an honoured member of the Ngati Te Whiti sub-tribe, group chairman Peter Love said Friday in a statement. It was “gifted as recognition of the enjoyment Sir Elton John’s music has given to Maori over the years and his loyal continuance to return to Aotearoa to entertain,” he said. Aotearoa is the Maori name for New Zealand.

The traditional cloak has bird feathers woven into a fine flax mat and is held across the shoulders with a drawstring. It is very rarely given so in away this award is very important.