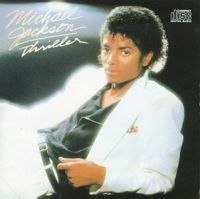 I believe it’s safe to say that [tag]Michael Jackson[/tag]’s Thriller is one of the best records ever made, an album that brought a dose of fresh funk and at a same time a dash of claustrophobia to the back then transitioning music scene. It was the album, with song for everyone and anytime, from rock to soul, thus Michael’s Thriller got to influence much of the ’80s and although he is now just a shadow of his former self, his gem still inspires artists even present day. It’s what got him the Prince of Pop crown and started a long streak of chart total domination.

Out of the total 9 tracks, a whooping 7 were top 10 hits, spending 80 consecutive weeks in the top 10, 37 of which were at number one, also about 100 million copies of Thriller were sold worldwide, since it’s release in 1983 and also is the only album to be dubbed best selling album for two years (1983-84). But these are just numbers, people will hardly remember him for being a successful artists, but rather for his revolutionary funk and of course the iconic Thriller single and video. I mean, who here doesn’t know thriller? I even tried to dance to it once, failed miserably, although people said do a good zombie impersonation. For a dose of nostalgia his the play button in the bellow video.

The video for Thriller was the most expensive, shocking, long and incredible thing ever to make it to tape before 1983, coupled with the back then rapid development of MTV, Michael Jackson got catapulted to instant international stardom. Actually he’s considered one of the first MTV stars, and the first African-American MTV star.

Today marks the 25th anniversary of Thriller and what better way to celebrate it, then a re-issue with remixes and covers, from the current pop and R&B celebrities like: will.i.am, Akon or Kanye West. The anniversary Thriller will be released on February 11 worldwide and includes, among other, previously unreleased tracks like “Someone in the Dark,” “For All Time”and “Carousel,” alongside a DVD with “Thriller,” “Beat It” and “Billie Jean (includes a Jackson five version too).”

In related news there’s a lot of rumors floating around that Jackson Five will reunite for a tour next year.