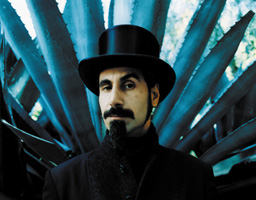 His current North American tour has had just two shows and he is being asked insistent questions about the state of [tag]System of a Down[/tag]. His forehead just crinkles and his answed is vague.

“People keep asking about that,” sighs System’s frontman, inside Queens Quay’s Orange Room. “We’re still friends, and the door remains open,” he says flatly. But after the huge multi-platinum albums, “Mesmerize” and “Hypnotize,” he sang without the band member and he is going to release “Elect the Dead” by Tuesday. He sings with System drummer John Dolmayan sometimes and with members of Primus but the big part is recorded by Tankian in his Los Angeles home studio.

“It reminds me of Borat, ‘King of the castle, king of the castle, get me a chair,'” he smiles, folding himself into a plush couch. “Well, you know what? I’ve always had the keys to the castle. I’ve always written and recorded a lot of music. Everything from electronic to classical to experimental to pop to rock to goth to noise. Any type of music I’ve felt, I’ve had the pleasure of going in and recording whenever it suited me.”. He claims that people are not used to many things that he has written and wants to show them other things that he is capable of writing.

The release is a heavy-rock lesson about U.S. foreign policy, mocking the corporatization of America’s military might (“Praise the Lord and Pass the Ammunition”), an apathetic voting public (“The Unthinking Majority”) and amoral government officials (“Elect the Dead”). But not just that. He has a wide range of tracks and supported by mammoth drums, ringing guitar and his voice the tracks sound very good.