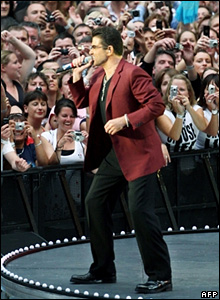 Yesterday night ex-Wham! pop star [tag]George Michael[/tag] entered the history books after performing the first ever concert in the new Wembley Stadium, after a seven years period since the last concert took place there, before it was demolished and rebuilt.

The pop star gave an extraordinary performance, worthy of a debut of this fashion, singing tracks from his Wham! days and also from his solo carrier, at the end of which he received a great round of applause. The show was part of Michael’s 25Live tour, that celebrates 25 years in the music industry for the star. After the tour Michael had this to add “amazing honour”. “I have felt a huge association with Wembley from when I was a child,” he told reporters.

Prior to the concert Michael was sentenced to 100 hours of community labor for careless driving, namely driving while tired and on prescribed meds. When asked if this would affect his performance in any way, Michael said “Not at all, not in the slightest. It’s just nice to have it out of the way.”

The next concerts that will be held at the Wemblay arena will be those performed by [tag]Muse[/tag] on June 16 and 17, also [tag]Sir Elton John[/tag] will play here on the 1st of July as part of the Concert of Diana, a memorial concert commemorating 10 years since the death of the Wales Princes. Other artists that will play on Wembley this summer are, to name a few, [tag]Metallica[/tag] on their Sick of the Studio ’07 tour or the mega artists part of the international phenomenon [tag]Live Earth[/tag].