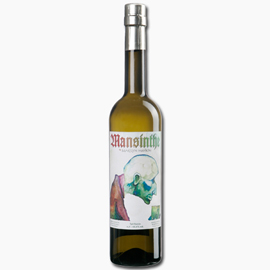 This is to say the least. Now we’ve all (or almost all) had our nights of drinking strange stuff, but this drink is said to have the smell of sewage water. Now I don’t know about you, but I don’t think I’ve ever drank something that had that smell.

His trip into the beverage world has not been quite crowned with succes, his own brand of absinthe has been panned by critics, who compared the drink’s odour to sewage water. If you want to buy it, it’s called ‘Mansinthe’.

It was tested at a gourmet food website Epicurious.com, by a panel whose biggest complaint was the smell. One taster says “If a smell could speak, this absinthe is saying: ‘Do not touch.'”

Well, it’s illegal in the US, but not here in Europe, so quite frankly if I get a chance to taste it, I’ll try it, and tell you how it is. If you have already, please tell us how it is! The bottle has a label with a self-portrait of Manson as an old man.