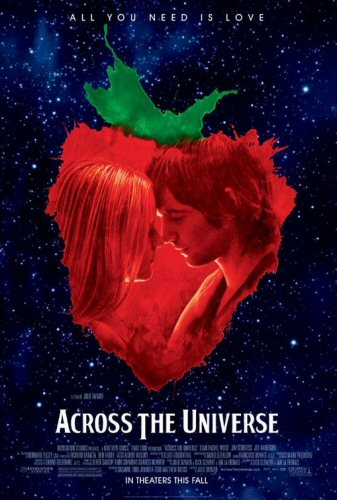 Possibly the best musical of the year Across The Universe is a fictional love story set in the 1960s amid the turbulent years of anti-war protest, the struggle for free speech and civil rights, mind exploration and rock and roll. Sounds a bit cliché, all the main theme has be made, remade and regurgitated thousands of times, but here’s where the real magic kicks in: the events and plot itself is shown in such a way that makes it as fresh and exciting as if it were all done for the first time, thanks to the brilliant work of director Julie Taymor.

What makes this movie so special is its soundtrack, after all it’s a musical, but what makes it trully unique is the fact that its comprised of 33 Beatles songs, sung by the film’s cast members, backed by top session musicians.The movie also features a lot of cameos, Bono in example can been seen playing a Dr. Robert, a groovy mustachioed hippie; you can see Bono’s cover of “I Am The Wolrus” at Spinner.

I’ll cut the chit-chat so here’s the trailer.

And and here’s another treat for you guys, bellow you can download one of my favorite Beatles cover, it’s not in the movie’s soundtrack but it’s worth a listen.