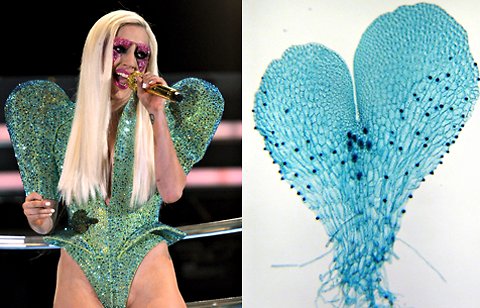 Source. You can barely make a difference between these to pictures.

Scientists from Duke University decided to name new 19 species of ferns after Lady Gaga. Hilarious, if you ask me, I don’t know what’s going on with scientists these days but I think they’ve gone a little gaga.
The biologist Kathleen Pryer and her team discovered a new genus of fern, and observing the similarities between these plants and Lady Gaga, maybe they thought that this way everybody will memorize their names easily, they ended up with these names: Gaga germanotta and Gaga monstraparva, the last one translated literally means something like “monster little”. 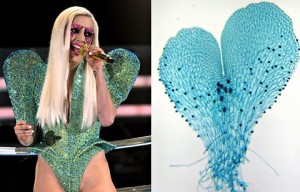 Source. You can barely see a difference between these to pictures.

I think even scientists are making fun of her, not only musicians (see the argue with Die Antwoord):

… in her performance at the 2010 Grammy Awards, Lady Gaga wore a heart-shaped Armani Prive’ costume with giant shoulders that looked, to Pryer’s trained eyes, exactly like the bisexual reproductive stage of the ferns, called a gametophyte. It was even the right shade of light green. The way the fern extends its new leaves in a clenched little ball also reminds Pryer of Gaga’s claw-like “paws up” salute to her fans.

I don’t really know if this is something she should be proud of – I mean, she was compared to many things, but now seriously, ferns? You have to admit it, even if you’re a Gaga fan, this is really funny.