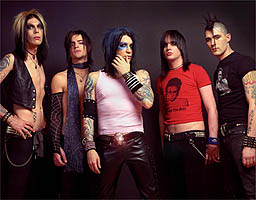 The glam rock singer goes back in the studio with long-time collaborator and producer Moe Berg, working on material. His last show was with his eponymously-named band on Halloween of 2006.

It seems he has been training six hours a day to become a bantam weight cage fighter, something that requires enormous dedication and a lifestyle change. That itself is something amazing but it seems he has found time to record music as well.

“The first song from the record is actually the theme song for the TV show,” says Black. “It’s just called ‘Robin’s Theme.’ That’s all it’s called for now. That one is slightly more literal, like ‘when I’m on the stage or when I’m in a cage’ type of thing. “A lot of the stuff that I’ve written in the last while is about challenges; it’s about taking on big things, it’s about trying to overcome things. “That song isn’t available yet, although I heard something about it becoming a ringtone, which is pretty cool.” Another song is “Righteous Girl,” which is about a young girl “going out and taking on big things.” The third finished track is “Save Me,” which Black describes as a “big bombastic ballad.” “I’m really into that right now,” he admits. “As much as I’m spending a lot of time punching people, and with a fair bit of controlled aggression, the music has started to come out much more ‘pretty.'”

He says that probably the former band members are going to be involved in this but he does not say how much they are going to get their hands dirty. Who could have guessed that a glam rocker could actually become a cage fighter. This world is just crazy.