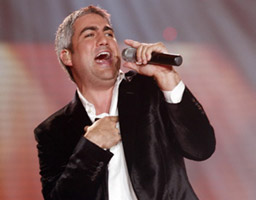 Taylor Hicks is among the fabled few which managed to win American Idol; his self-titled, post-“Idol” album, released in December 2006, debuted at No. 2 on the charts. You would expect him to be a gold mine yet things are not as good as you could have believed.

The thing is he has been dropped by J Records, a label within Sony-BMG, which signs the show’s singers. “Taylor is going to record on his own for the next album,” said J Records publicist Liz Morentin, who did not give further details regarding Hicks.

This probably comes after the fact that despite selling solid 699,000 copies he has not reached the million mark as other winners. Also in the weeks after his work was released it slid down quite quickly. The man is very good but considering his musical style you cannot expect him to have a huge mainstream success; the masses shall never fully accept that genre of music.

Another “Idol” winner – Ruben Studdard of season two – left his contract with J Records late last year but he has continued his contract with 19 Entertainment, the company managed by “Idol” creator Simon Fuller. He is working on an upcoming album, but it will not be distributed by J Records. His first release sold just 236,000 copies. Best of luck to you guys.