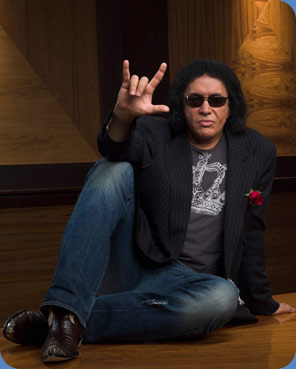 Well Gene Simmons has entered a long list of celebrities who were caught in the act, with his pants down for the whole world to see. If you want to see the stuff, you can get it from here, but don’t open it if you’re in a public place.

So his dirty little secret is called Elsa. She is a model, and one of the Frank’s Engery Drink Girls, a brand which Gene endorses (apparently to fuel his sex drive). The good thing for him is that the girl is quite hot, and there are way worse people to be caught having sex with than an australian model.

So now if you were really malitious, this situation would pop in your head: the ‘Demon’ is seen, in t-shirt only, doing some very naughty, rock star like things to a sexy foreign blonde in the video. He claims to having slept with over 5,000 women. Why not sell it as official KISS merchandise?

He obviously still is a god of thunder, at least down below. Now without joking anymore, the bad thing is that he is in a hard situation because he has been living with/dating former Playmate Shannon Tweed for 23 years, and they have 2 kids. Now I find it hard to believe that those kids are going to find this as half as fun as we do. Tough!