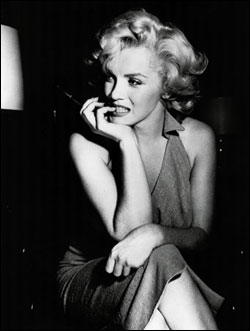 We know how much Madonna has stirred up spirits in her life, and there probably are just few who have done as much as her which outraged. Face it, love her or hate her, Madonna did what she wanted, without considering the impact her actions have; and we love that about her!But as far as I’m concerned, until now nobody can beat Marilyn Monroe at that game! She’s undoubtely the best, even after all these years. Now let’s get back to our story here. A man from Las Vegas alerted the media that he has a rare photo of Marilyn Monroe posing nude as a hitchhiker.

Of course, what he had was a picture of Madonna; quite a famous picture in fact. The image appeared in “Sex,” her 1992 book of risque photography. She had heels, a handbag, and a cigaretter in her mouth. There’s Madonna for you. Lawrence Nicastro, 73, said he found the grainy, poster-size photo last year while going through storage items at his home in Las Vegas.

The man admitter his mistake, which proved to be very funny because all of the fuss that was caused. So who wins here? The guy definetly not, Marilyn certainly had nothing to gain… So Madonna won. Why? Harris put it clearly:
“She really looks like Marilyn Monroe.”