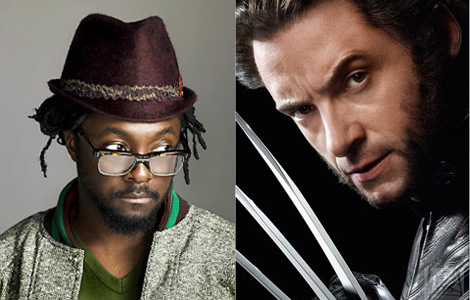 I found X-Men to be among the only present day movie series, that did somewhat justice to the iconic Marvel comics their based upon. I really enjoyed the whole X-Men trilogy, because of it’s dazzling special effects, so-so story line and of course the spectacular mutants, each with its special ability. My clear favorite? Wolverine, hands down; so recent news of a new X-Men movie, a prequel to the events in the original series, that will be centered around the charismatic mutant, made my day. No doubt a clear sense of money and merchandising is behind the whole movie, but a sincere thumbs up for the movie’s producers.

Anyway let’s get to the subject at hand at that being R&B star will.i.am is set to play in “X-Men Origins: Wolverine” too … as a mutant. The Black Eyed Peas frontman will play Wraith, a mutant with the power to turn himself translucent. Major turn off for me here, as I’m more the skeptical in his abilities to act, I mean watch the man’s videos and you’ll get my point. The movie’s time frame is set 17 years before the first X-Men movie, following the origins of the popular mutant interpreted by Hugh Jackman, the dude that played in the previous 3 X-Men movies as well.

One of my favorite new wave actors Ryan Reynolds will also make his appearance in the movie as a cameo, where he’ll play Wade “Deadpool” Wilson, the sarcastic “Merc With a Mouth.”

“It’s a very tricky character to do. It’s ambiguous whether he’s good or bad. He’s a mercenary. This is all to say nothing of the fact that his face is made entirely of scar tissue,” Reynolds sighed back in August. “These are huge issues.

“[Deadpool is] a derivative of the Weapon X program,” the same program Wolverine went through, Reynolds said. “They turned him into a puddle and shipped him off. Just left him for dead. But he came back with all these mutant powers. And he’s pissed off — in a full-fledged, I’m-gonna-get-you way.”

A welcomed surprise is the addition of Gambit in the characters list, as he’s been, unfairly in my opinion, forgotten in the past movies. Taylor Kitsch, one of the stars of NBC’s “Friday Night Lights,” will play the role, a Cajun thief whose powers include the manipulation of kinetic energy, which allows him to use card-throwing to deadly effect.

Production began this month in New Zealand before moving to Australia. A New Orleans shoot also is on the docket. Except the movie to land sometime next year, on May 1 2009 via FOX.