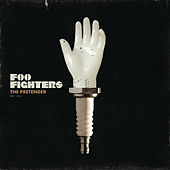 The new [tag]Foo Fighters[/tag] single “The Pretender“, due to be out on September 10, has been leaked all over the internet, after being played in a world exclusive on KROQ so now anyone can download and listen it. The song’s great, with the classic Foo Fighterish stadium anthem vibe and sound, great riffage and powerful Dave Grohl vocals. All we can do now is wait for the full album, “Echoes, Silence, Patience and Grace”, to be released on 25 September and hope for some more hard rocking; I expect this to be their best effort yet!

**UPDATE: the video for The Pretender has been released, check it out here. **