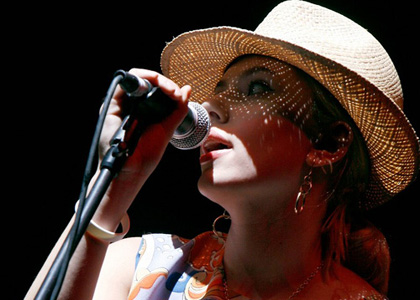 After making a name out of herself in the movie business, acclaimed actress [tag]Scarlett Johansson[/tag] is set to make her appearance in the music world as well. You may have first listened to a glimpse of her vocal talents in “Summertime” for Unexpected Dreams – Songs from the Stars, a collection of songs recorded by Hollywood actors and most recently at the Coachella Festival, California where she sang with The Jesus And Mary Chain as part of a reunion show.

Now she is ready to release her debut album, titled “Scarlett Sings Tom Waits“, a compilation record consisted of Scarlett’s covers of [tag]Tom Waits[/tag] songs. David Sitek, the guitarist from the indie band [tag]TV On The Radio[/tag] is set to produce Scarlett’s album, that feature guest appearance from [tag]Yeah Yeah Yeahs[/tag] and [tag]Celebration[/tag].The recordings, that took 33 days in Maurice, Louisiana at the Dockside Studio, are over and Scarlett debut release date should be posted any time now.

Studio owner Steve Nails described the music as: “like a theater, big screen. Lots of heavy bass tones in it. Without a bass guitar, we used all kind of different instruments to create these sounds. It was a great experiment. Very avant garde. She sounds like Marilyn Monroe.” He also “predicts her CD will go platinum and win a Grammy,” according to the Daily Advertiser.

I’ll say platinum, she got like millions of fans, i think that’s enough for at least a golden record. Do you think Miss Johansson has what it takes to make it in the music business ?