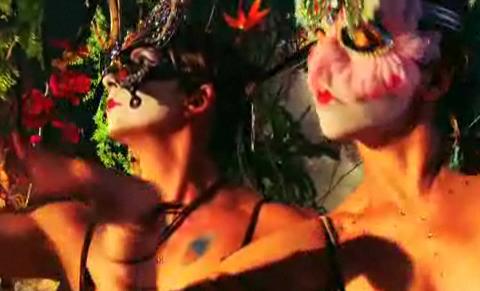 Anthony and The johnsons

“The Crying Light,” the latest effort from behalf of the dark cabaret group Anthony and The Johnsons, is incredible from so many point of views. It’s beautifully dark, melodic and thoughtful, while supporting a heavy dose of catchy pop as well.

The video for “Epilepsy is Dancing,” the first single off the album, is …breath taking. Intricate makeup, stage sets and costumes help the video stand out as a sheer spectacle for both eyes and ears. The dementia and outer world day-dreaming epilepsy can induce is perfectly represented in this very artsy video. Beware of some NSFW frames in the video, as the video very much resembles a Bacchic scenery. Here’s a snippet from the press release. [ via Pitchfork.tv]

“Antony asked his friends the Wachowski Brothers to work with him on a video for his new single ‘Epilepsy Is Dancing’. They in turn invited painters Tino Rodriguez and Virgo Paradiso to create costumes and a mystical environment and choreographer Sean Dorsey and his dancers to bring the dream sequence to life. Antony’s artistic partner Johanna Constantine stars as herself in the role of ‘Deer Monster’. The video was lit and shot by the up-and-coming directors of photography, Chris Blasingame and Banker White, and produced by Jim Jerome. The production team collectively named themselves AFAS. Please enjoy the fruits of their San Francisco art party.”