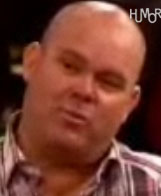 Anthony and his band have been performing on TV all over for the past few months. Hard to name a few shows that didn’t have them as guests, and here we are publishing a story on them performing the exquisite “One Dove” live on Dutch national television, on Paul de Leeuw‘s show. Who’s a total nutcase, by the way!

Check out the performance bellow and skip or not (if you’re dutch isn’t quite as rusty as mine) through the first 2 and a half minutes.

Speaking of Paul de Leeuw, it seems he’s quite a big personality in the Netherlands, with a TV career spanning for well over 20 years. Anyway, I browsed through a few YouTube videos of his shows and completly laughed my ass off! Of course, I didn’t understand a word out of his babblings, but the dude sure knows how to party. I’ve attached another video, right bellow Anthony’s, featuring Paul and a person suffering of Down Syndrome. The both rode a pony driven carrige.  This is Amsterdam!