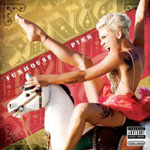 Do you remember that crazy girl with ridiculously pink hair, who wanted to get the party started? Well here she is a few years back, a grown-up woman with a successful career as a singer-songwriter releasing her new record ‘Funhouse’. Don’t let the name fool you. If you’re expecting some fun, go elsewhere. The new Pink’s creation deals with heartbreaks and divorce.

“I think I’ve just lost my husband” – the singer shouts in the upbeat and funny ‘So What’, the first single, that quickly occupied the charts and radiostations. The song became the most successful in Pink’s career to date and there’s no wonder why. ‘So What’ is a very good illustration of that kind of Pink we all love and hate. It’s bratty and stupid and uncomfortably catchy, yet touching and appealing. Unfortunately the rest of the record is failed to impress.

Doesn’t matter how loud the girl screams that she’s still a rockstar, it’s mainly pop that keeps her on the surface. And this record is here to prove it once again. Yes, the ‘Crystall Ball’ has a folk feeling to it and there are heavy guitars on ‘Ave Maria A’ and the title track has a touch of disco (which sounds interesting but gets boring after the forth listening), while ‘Mean’ sounds like country rock and ‘Please Don’t Leave Me’ has the whole potential to be labeled as some wicked sort of new wave, but still every single song in here is an overly produced already prepared for the radio pop jam. This is the music supposed to appeal to the teen girls mostly, which is sorta confusing regarding the divorce subject of the record.

Pink was always good at laughing at her insecurities and fears, this time around she mostly whines and complains, the exceptions being the aforementioned ‘So What’ and ‘Glitter in the Air’, which is a grower. I definitely understand that girl is in pain of loosing her loved one but this is not the reason to pack your record with sugar pop ballads, the ones that could be used by those girls, Pink loves to bash at. Like Jessica Simpson. Or Britney Spears. Or another blond with big boobs.

The girl can do much better than this, she has a distinctive voice, she is able to write good songs and she can really put up an amazing live show. Unfortunately to say it seems that the Pink’s party is over. However, somewhere in the back of my mind I still hope she’ll be able to start another one.