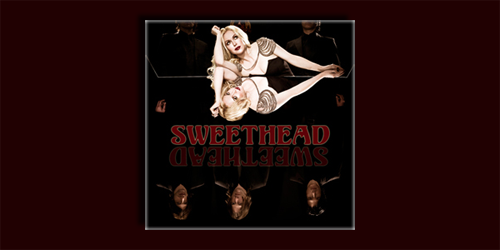 News for our several States-side chums today. Desert rock propagators with potential, Sweethead, are releasing their unimaginatively eponymous debut album on your side of the Atlantic today. Sweethead, of course, are the pet project of dapper sometimes-Queen of the Stone Age Troy Van Leeuwen, who beefs up his back end (oo-er) with the dab hands of Mark Lanegan Band alumni Norm Block and Eddie Nappi, and also unleashes the vixenly stlyings of singer Serrina Sims (whom I excellently described previously as sounding like a promotional figure for a popular EA life-management game. Honestly, with all these splendid jokes I conjure, it’s a wonder I have time to do such a mediocre job in my place of work. I am STRONG LIKE OX.)

Having previously cast my steely, corrective eyewear-enhanced gaze over its sadly under-nourished form back in November of last year, I concluded that ones of its chief follies was its complete failure to include the finest song from their Great Disruptors EP, “Traumatised and Dumb”. Rather commendably, they seem to have recognised this mistake, and intelligently inserted it into the tracklisting for this release. And, in a turn of events that almost parodies their previous mess-ups, they’ve only gone and made “Traumatised and Dumb” the lead single this time around. Which proves, conclusively and irrefutably, that I am always right. The video for said single is this thing: after the cut.

Sweethead – Traumatized And Dumb from The End Records on Vimeo.