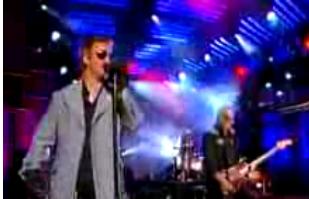 First I was stocked by the new EODM album art, then I got really jumpy when the official video for the first single Wannabe in LA come up, but I finally got my copy of Heart On the day before yesterday I was really close to climax. I won’t go ahead with the actual spinning of the CD, as it involves wet pants. Whatever.

Anyway, yesterday Jesse Hughes, joined by some QOTSA maestros, including a really badass, as usual, Josh Homme dressed up in sorta devious trench coat, doing backing vocals and joggling around a tambourine here and there, performed “Wannabe in LA” live at Jimmy Kimmel. The performance isn’t that great, I mean, what the heck, if I weren’t such a fan of the band, I’d say it was damn well awful, but you didn’t hear that from me. The awesomeness revolving around the video is enough to make it watchable, though.