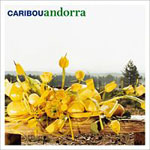 Imagine living in a world of your own, a world where man is no longer its master and overseer, but a simple observer, a world in which innocence, youth and all that is pure blossoms. I might seem like I’m getting all [tag]John Lennon[/tag] on you, but I’m getting somewhere. This world of fiction has successfully been transposed by Daniel Snaith, you all know him by his stage name [tag]Caribou[/tag], in art, specifically in his music, and even more specifically in Andorra.

This is Daniel’s fifth full length album, successfully releasing better and better work along the 2000s, before this latest stroke of genius. An album that sounds remarkably unique and special, an album that will calm your senses. It’s mainly a great intertwining of electronica and pop, resulting in a trip down a psychedelic and polyrhythmic road, in to a valley more obscure and remote then the fiscal paradise it’s named after.

A lot of the influences and sounds that can be listened to in Andorra, ca be very well summarized in the albums’ first single and opener Melody Day. An ray of perfect pop, that is both driving and blissful, combining Boredoms-big drum patterns with a wide-eyed wall of sound tipping over with guitars, ripples of electronics, and trilling flutes that still showcase his new focus on clarity. “Sandy” sounds more like a ballad from the late ’60s, with old drum works and dusty guitar riffs, resembling Mamas And The Papas. Actually the funny thing I’ve found about this record is the startling number of tracks named after women, there’s “Sandy”, “Desiree”, “Irene” and “Niobe”.

“Irene” is my clearly favorite, three and a half minutes of brilliant synth pop, that almost entrances you by it’s peacefulness and smooth melodic line, that is toped by Snaith’s whispery, chilling voice. Actually what makes this album stand out from all the rest is Snaith’s vocals, which are a lot more commanding and confident. “Sundialing” and “After Hours” seem more at place in Caribou’s 2005 album The Milk Of Human Kindness, with repetitive rhythm, but his now improved vocal skills make them a decent listen and great supportive tracks for the LP’s highlights. Andorra comes to a epic close though the 8 minute “Niobe”, a very intense song both sonically and dynamically.

Andorra is a big step up for Daniel Snaith, a man that at his first signing to a major label doesn’t disappoint and even more releases his best work yet; a perfect synth pop record, flawless. Daniel proves that the mind is a wonderful place, that can be morphed to ones deepest desires; In Daniel’s case it’s a world where impossible is nothing and tranquility hovers above the smooth and wild grass.