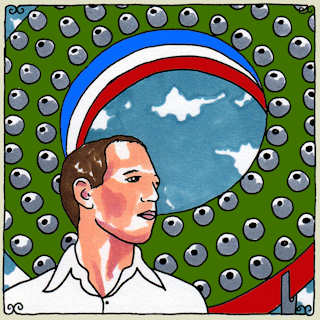 I find Dan Snaith to be one of the most underrated musicians of the electronica scene today, simply because the man isn’t getting by far the kind of coverage and credit he deserves. I absolutely adored and fell in love with “Andorra” day by day as I digested the album and each track started to grow on me. With this in mind, you can imagine I had high hopes and anxious feeling regarding Caribou‘s latest effort, “Swim” released earlier this year – all, fortunately, unfounded since Daniel simply blew me away once again.

Sean Moeller, did a better job than I ever will in describing the Caribou effect as part of his ahead word for Dan Snaith’s Daytrotter session.

Canadian Dan Snaith creates songs that are so touchable and so visual and yet they all contain such opposite and equal reactions at the same time. They are untouchable and mysterious. They are filled with eighteen different personalities, but they all share the same roof and that means that they find a way to coexist together and like pets starting to look like their owners and spouses like each other, over a long enough period of time, the sounds and arrangements – draped with a pointed and very focused vision that snakes through all that Snaith puts his hands on – quickly begin to share organs and limbs. Sooner than you’d think – these melting butter sounds, these pops and crackles, these eyes adjusting to the lightness or darkness in the room, these chases and these altercations – you find yourself confusing them for identical twins, believing that they sound alike and alive with the spirits of the collective.

Dan played live three brand new songs off his latest album, Swim, for the Daytrotter session, which you can download and stream from here at an excellent sound quality – all for free!