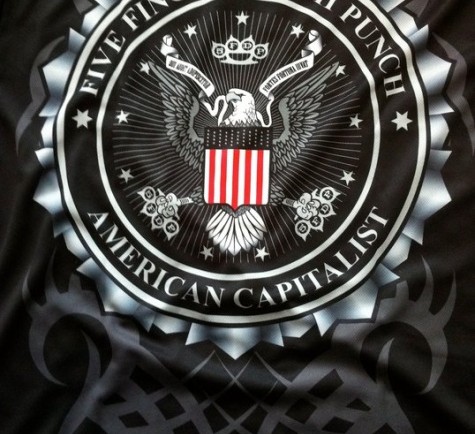 As one of my mates quite eloquently put it, ‘Five Finger Death Punch delivered yet another great set of groove metal’. Many have said that this would be the album that defines their sound, and that now we’re truly going to see what they’re made of. Well if you ask me, they’re made out of metal, from top to bottom.

The first thing that hits you is the bass. The bass is remarkably solid throughout the whole album – and so are the drums, which bring rhythm and chaos to the table. The (already) signature drop B guitar solos sound sweet as well, and, perhaps the most important thing – they all sound good together; something you rarely see in metal today.

So, once you get used to the brutal riffs and the violent sound, the lyrics hit you. To be honest, I was expecting them to mellow down. I mean, most artists tend to lose some of the hate when they make it big, but this isn’t the case for FFDP. They’re just as full of hate and spiteful as ever – and that works just fine on the lyrics. ‘American Capitalist’ is perhaps the biggest hook here, though my personal favorite is ‘Generation Dead’, which treats society with the usual repulsion and distain:
I look around and all I see is evil
The walking dead disguised as real people
It’s kill or be killed cause life is not forever
It comes apart and then it falls together

However, once you get halfway past the album, the guitar might tend to become a little repetitive or stale. But damn, that drop B sound is freakin A! Zoltan Bathory and Jason Hook team up to create a heavy/death sound, with classic influences, and unlike with many bands, the solos actually sounds. Another interesting fact you might notice is the introduction of some acoustic intros, which again, sound really good and fit in the overall scheme of the album. But the rhythm, that’s where it all goes spot on! You can feel the sheer anger coming out of it, complemented by Ivan Moody’s down and dirty vocals. You can especially get a taste of that with ‘100 Ways to Hate’.

Perhaps, aside from the somewhat repetition of guitar parts, the only things one could object to the album is the fact that, at times, lyrics seem to be written by a teenager suffering from angst and anxiety; but most of the time, they really have a lot of … body parts located beneath the belt. All in all, one of the best things you’ll hear this year, and one of the top metal albums of the decade.