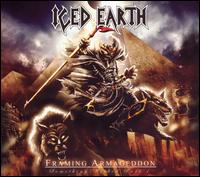 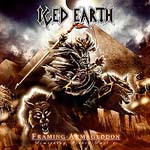 There are some metal bands which like to wallow in their misery, some which like to party hard, and some which refuse categoricaly to indulge in any of the aforementioned well-traveled roads. Iced Earth is that kind of band.They specialize in triumphant sounding metal and show the masterful guitar work of founding member Jon Schaffer (“Something Wicked Part One”) and also the multi-octave vocal gymnastics from former Judas Priest frontman Tim “Ripper” Owens (“Infiltrate and Assimilate”). The other musicians also prove to be very talented and show off their musical prowess.Clocking in at nearly 70 minutes it is epic, both in length and musical vision. The songs are dense and the more you listen to them the more you notice the incredible amount of detail.

The diversity is remarcable and you can hear upbeat power metal anthems, progressive mid-tempo songs and soaring ballads. The songwriting is breathtaking. Just reading the lyrics gives you shivers. Jon Schaffer has pulled out every trick there is and he has reached a higher lever in songwriting. He has been able to craft songs that are powerful, melodic and memorable but he also shows iddle eastern and creates a kind of lyrical arc.Just listening to the chorus of “A Charge To Keep” makes you think of ancient wars and victories. ‘

Framing Armageddon’ is a concept album and the storyline is “A heavy metal sci-fi thriller of epic proportions, propelling one through a tale of evil and tragic loss, as well as the deception, patience and belief it takes to plan a reckoning.”. It tells the story of the Setians, who were the original inhabitants of Earth, and are directly descended from the “Great Architect”. The Setian High Council, which consists of the twelve Elders and the High Priest, make a plan to get revenge on the invading human race. They plan to initiate “The Clouding”, which involves brainwashing all the humans and making them forget their origins. A music video for “Ten Thousand Strong” has been released and that could help improve the image of such a musically potent band. They have proven themselves worthy of recognition and probably in no time they are bound to be listened to by more and more people.