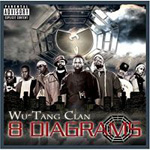 It’s recently been a weird road for the legendary [tag]Wu Tang Clan[/tag]. A division has been introduced within the group, and a weird yet disturbing feeling has flooded this album’s release. From member Raekwon calling RZA a hip-hop hippie, moving the album in the wrong direction, to [tag]Ghoastface Killah[/tag] calling the album as a whole bullshit, it has been a eerie start for an album that should be getting ready for one of the most anticipated releases in hip-hop this year. So with that we see if they’re wrong. If the album is something great like the Wu enthusiast hope it to be, or if it’s this bullshit we’re hearing about. This is Wu Tang Clans “8 Diagrams” (SRC, Universal Motown Records).

Since the mid to late 90’s it is undisputed that The Wu Tang Clan has brought in legendary talent, inventive and dark production, and excellent – many times classic – solo releases. Through this, you are going to usually have two categories when dealing with an album of this caliber. Either it’s a classic or complete and utter trash. But, this album is neither. In essence this album is just average. Nothing special but a must have for any Wu fan.

Lyrically, the album could not be better, which is the high point, as pretty much every member brings their A game. “Campfire”, the first track on the album, has Method Man roaring through the dark a melodic beat and sets the tone as Ghost comes in and lyrically slaughters the track. The Erykah Badu assisted, “The Heart Gently Weeps”, has Raekwon, Ghost, and Meth providing the best lyrical front on the album. The low points though usually come through on the hooks which usually are in the form of the weird, boring, or forced. Tracks lack “Gun Will Go” has Raekwon, Method, Masta Killa beautifully sulking though the black-gutter like beat, but is severely hampered by the annoying, repetitive and out of place singing from Sunny Valentine.

The production on the other hand is usually hit or miss – more miss than hit. Rza has recently changed his production style to a more organic, musical feel like his latest movie soundtracks are. This usually does not work though as tracks like “Starter” and “Windmill” have you scratching you head as you feel like you have heard these samples before – which you have. “Rushing Elephants”, “Unpredictable”, and “Stick Me for My Riches” are just plain terrible and have the Wu members sounding uneasy and sometime bored. Production wise the high points come in the froms of the oddly enjoyable “Sunlight” – which the Rza doesn’t really help – and the soulful “Life Changes” which bring light in this dark tunnel.

The biggest problem with this album is not the production though; it’s the sad fact that this is one of their least cohesive albums to date. With pretty much every member coming out with more than 3 albums a piece, countless mixtapes, and guest features each MC has come into their own as an individual rapper with their own individual style. With this in mind this album does not sound like a Raekwon, Ghostface, Masta Killa, or even Wu Tang album. This sounds like a RZA album featuring the Wu Tang Clan. So it is easy to understand what Raekwon and Ghostface were saying when they said that RZA was taking the album in the wrong direction. There is no diversity in production to complement the diversity in the group. Bringing in a Kanye, Dr. Dre, or Pharrell beat like Ghostface said would have been an excellent idea to diversify this album and let some of the other members show their full potential. But, instead what we have here is just an average album; some hit or miss tracks, and nothing to really come back to. Which is said because this could have been as Ghostface says “the mega bomb”.