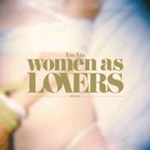 Something I always appreciate in a good musician is originality, better yet actually uniqueness. A rare quality these days, in a time of piracy, digital mastering and plagiarism of retro musical values. The San Fransisco experimentalists, however, don’t fall in the last category, their different and being different isn’t a bad thing at all, no in Xiu Xiu’s case anyway. The band has, in the course of a nearly a decade, managed to develop a sound, so remarkably unique and experimental, that they’ve come to be named as the new indie wave pioneers. And like any, in term, remarkable band the Jamie Stewart led quartet has always avoided repetitiveness and always strove to put out unique and musically challenging records, like their sixth effort “Women as Lovers.”

Women as Lovers probably is the band’s most accessible album to date, frontman Jamie Stewart acknowledging himself that its “more approachable or communicative on a basic human level.” If you’re a bit familiarized with Xiu Xiu’s previous records, then upon a first listen of Women as Lovers, you’ll immediately notice a slight difference in style. The constant noir vibe is still here, however this is a more instrumental album, compared to the others, with a more elaborate use of bass, guitar and most importantly drums. This helps build a live sensation to the album, that ultimately translated in a more humane and confident album.

The album opens up with a bang in the form of “I Do What I Want When I Want”, that features synths and a tight bass line, but what makes it so special is Jamie’s laid back vocals and lyrics, coupled with a pseudo-xylophone chorus packed with distortions and topped by a saxophone solo. These all add up and form a eclectic mix, that fits perfectly to Women as Lovers’ experimental and dark undertones. On “F.T.W” as series of avangarde elements are juxtaposed, as walls of hieratic samples and beats are overlapped over melodic vocals and guitar work.

One of the record’s most upbeat songs is “No Friend Oh!,” featuring dazzling samples, annoying-like trumpets and Jamie’s plus Caralee’s (nice to see her singing on more tracks) soothing vocals, that seemingly makes it sound like something you’d hear in a fairytale soundtrack. On the Queen/David Bowie cover, “Pressure,” the gang manage to live up to the original, as Angels of Light frontman, Michael Gira, plays Bowie to Stewart’s Freddy Mercury. Women as Lovers comes to a epic end, as closer “Gayle Lynn” slowly unfolds, revealing the band’s more progressive side.

Eight years after their debut, Xiu Xiu still continues to put out avant-garde music, with a dash of indie rock, of the highest quality, evolving from record to record and constantly growing their fan base without selling out. Women as Lovers is indeed one of their most fulfilling albums, maybe not at the same level with bombshell The Air Force, but definitely somewhere up there and considering it’s increased accessibility degree, there isn’t any better place to start getting into band. Dive deep and don’t look back.