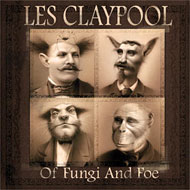 Welcome one and all to my first article for ZMEmusic.com. My name Is Jon Collins, and I’ll be your humble Reviewer for the duration of the….. uh, review. I hope this turns into a regular thing for me, so any ‘helpful’ feedback you, dear reader, wish to plaster me with, I say plaster away. I’ll take all I can get.

As a fan of the ‘Odd and Unusual’, I thought it fitting to take a look at an album that definitely dwells smack-dab in the thick of that musical domain. I’m talking about Primus frontman Les Claypool‘s new solo release “Of Fungi and Foe“.

While not everyones proverbial cup of tea, Les Claypool has been entertaining the hell out of people (Ok, some people) since the late 80’s with his trademark hillbilly sing/speak storytelling vocals paired to experimental prog-rock/metal insanity. I’ll tell you one thing: whoever Claypool writes this music for, it certainly isn’t the radio-listening public. As with the entire Primus discography, “Of Fungi and Foe” fits exactly in the “What the Hell is This?” category for most casual music listeners.

While being involved in numerous side projects apart from the now-in-hiatus Primus, this is technically his second solo effort after the similarly titled “Of Whale and Woe“, released in 2006. This new, 12 track album was born from soundtrack work he did for the “Mushroom Men” series of video games, and the horror film “Pig Hunt“, which, interestingly enough, chronicles a hunting trip gone heinously wrong when the protagonists find themselves caught up in a backwoods world of rednecks,drugs and a crazy girl-cult that worships a 1600 kg killer boar they call “The Ripper”. Sounds like Claypool material on both accounts.

It’s pretty obvious which tracks hailed from the short ambient loop-pieces Claypool originally created for the “Mushroom Men” without having played any of the games. The entire album has an almost childish, swampy/voodoo/carnival vibe, which isn’t necessarily a bad thing (Unless, that is, you happen to hate that sort of thing). I can really hear the Waits influence throughout, which makes sense as Claypool has worked with Waits on multiple occasions. The first two tracks, “Mushroom Men“, and “Amanitas” (The latter being the genus of fungi that accounts for 90% of all fungi related human fatalities world wide. Look at that. We’re learning too.) attempt to transport the listener into the toxic, tribal, swampy soundscape that you’ll either find eccentrically quirky or annoying. “Mushroom Men“, in particular, has a very simple ‘videogame soundtrack’ feel, which can grate on the ears after hearing it more than two or three times. Actually, scratch that. It sounds like a full-on theme song, much like the “Robot Chicken” theme, only you wouldn’t want to hear this every week. The playful xylophone action and rhythmic hand drums lend to the ambience he’s going for, but the repetitive “Ma-ma-ma Mushroom Men” gets pretty old, pretty fast. “Amanitas” is like a    ‘shroom trip gone way bad, and is only somewhat more enjoyable than the first track.

The next few tracks pull back from the swamp, but only as far as the backwoods community just outside the swamp. “Red State Girl” pokes humorously at American vice-president-hopeful-that-thankfully-never-was Sarah Palin with a grubby, gnarled hillbilly finger, clearly conveying to the listener Claypool’s apparent distaste toward John McCain’s whole presidential campaign following. It’s a listenable track with a plucky, up and down string accompaniment, but, again, has a low repeat value. The tracks “Booneville Stomp“, “Kazoo“, and “Ol’ Rosco” stay in that same vein, though ditching the social commentary, focussing on what I can only describe as a “White Trash” lifestyle, and tossing in the occasional smokey jazz undertone, particularly on “Kazoo“, which the best of these three tracks.

The remainder of the tracks, save for my choices for standout tracks, are forgettable in that they sound like extensions of the aforementioned songs. The low point of the record for me is the ridiculous track “What Would Sir George Martin Do“. This has got to be the weirdest way to relate a trip to London, while simultaneously dealing with character-shortcomings, and honoring (sorta) the man behind the Beatles. I keep listening to it, although I really dislike this track. It’s playful, and kind of funny in the way he structures the verses. Hell, it’s even got a kazoo solo. Mostly, it sounds like a drug-induced, Muppet-esque-type ditty.

The standout track for me was “Bite Out of Life“, which has an armenian-zydeco kinda thing going on with very interesting, high powered backup vocals by Eugene Hutz of the apparently critically-acclaimed New York gypsy punk band Gogol Bordello. It’s by far the most enjoyable track, for myself anyway, slightly similar of some Serj Tankian work. Hutz breaks into what I think is Ukrainian (?) about half way through the track, and for me the whole thing works. You be the judge. “You Can’t Tell Errol Anything” has to be my second choice for standout track because I think everyone knows someone who thinks they know EVERYTHING. It still hangs in that voodoo/swamp tree, but I think Claypool describes this person (“… Errol,  the smart boy, who wouldn’t listen for shit”) to a tee.

All in all, despite being a fan of the man, I think this oddity of a record was nearly summed up by Claypool himself with a line from the track “Primed by 29” : “Geez, what a terrible song – it stinks like a big wet donkey dong – but if you wrap your lips around a bong – I’m sure it’ll begin to sound just fine…”. They say you are your own worst critic. In this case, perhaps ‘accurate critic’ would be more fitting for the old adage. I imagine after a reefer or two, some hidden quality within the album might shine through, but that could be said for a lot of crappy records. I may listen to a few of the noted tracks again from time to time, but for the most part “Of Fungi and Foe” is a record only diehard fans of Les Claypool are going to pick up and play regularly.

And so ends my first review for ZME, and I’m looking already looking forward to the next one.

While moonlighting as a common laborer by day, Jon Collins undergoes a none-too-spectacular transformation in the evenings (and weekends). He emerges as a vigilante reviewer of all things music. Self-charged with the task of uncovering the best, and worst, that music has to offer, he stalks through the night, bringing his own kind of street-justice to the music world.

View all articles by Jon Collins