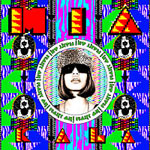 “M.I.A.’s coming back with power!” At least that’s what trip-hop princess Mathangi “Maya” Arulpragasam, or more know by her stage name [tag]M.I.A.[/tag], states in the chorus of “Bamboo Banga”, a new song of her latest album “Kala“. Indeed she’s back in full throttle; if you thought her debut album, “Arular“, was tight, varied and adventures, then wait till you listen to “Kala”.

As in Arular, Maya’s sophomore album songs employ a lot of controversial and politically natured lyrics. Lyrics natured by her tumultuous childhood, growing up in the war shattered land of Sri-Lanka, the fact that her father, Arul Pragasam, was a well known militant against the government, didn’t help. Because of her father dangerous political status, she was forced to turn refugee and flee the country in India, then back to her birthplace of London, England. Her childhood experience is well resonated in her work, trying to expose the horrors and crude reality of war and poverty, fighting for her ideals. “The Third World deserves freedom of speech like everyone else”, she sincerely declares.

The amalgam of influences vary from minimal electronica to conventional hip-hip, often intertwined in the a musical genre commonly known as grime (The Streets, Lady Sovereign). Also worth mentioned is the excellent production, from behalf of London’s own Switch. The album’s highlight is “Paper Planes”, a clear critique to the US administration, in which M.I.A. in a young group of children sing in a chorus: “All I wanna do is *GUN SHOTS*/And *SOUND OF CASH REGISTER OPENING*/And take your money”.

Maya’s vocal skills are put to the test on the tracks that feature less MCing, but more singing. She’s not the best singer i can tell you that, pretty average I might add, fact proved by her live shows where she comes a bit short, but when conjoined with the excellent beats and electro mixes she actually sounds great, like in “20$”, “World Town” or “Turn”. The rape of Africa is one of main themes approached by M.I.A., theme reflected in tracks like “20$” and “Hussel”, the last one featuring Nigerian MC Afrikan Boy, in which the duo rap about bribes, illegal immigration, hustling on a electro infused background.

A lot of effort was put in this album by M.I.A., as she traveled all over the world to sample various music from a broad diversity of cultures, as it can been heard in “Mango Pickle Down”, a track featuring The Wilcannia Mob, an Aboriginal kids hip-hop group. A similar tribe like sound can be heard in “Bird Flu”. “Boyz”, the album’s first single, is a extraordinary example of excellent production, with layer above layers of samples and beats. The song itself is about the stupidity of men, or boys, feminism and anti-war remarks from behalf of M.I.A.

M.I.A. has certainly reached a highpoint in her career, she now far from her past self thought MCing and making mix-tapes in her London bedroom. She’s successfully lead the way for new artists, in the funk rhythm/electro dance hall world, like Tigarah, CSS, Bonde do Role, New Young Pony Club, and others. Kala, through its infused beats and political visions, makes both a delightful and informative listen, a solid contender for 2007’s best album of the year.