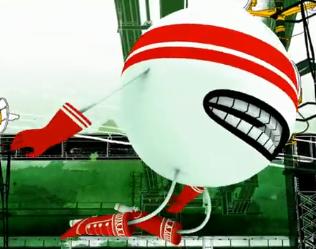 One of the most interesting projects of the year was N.A.S.A‘s “The Spirit of Apollo”, a five year in the making, 18-track album, which featured three-dozen guest stars from mainstream rock and hip-hop stars to obscure, yet very talented high-profile street performers. “Spacious Thoughts”, one of the tracks off Apollo, is a collaboration between N.A.S.A. and two true giants of their own respective scenes, Tom Waits and Kool Keith. Impressive names to go with a surprisingly unimpressive song, though, but what the song lacked in coherence and production it more than made up for in visuals once with the release of its Fluorescent Hill directed music video. The video premiered  today on Boing Boing, where you can also find an interview with Fluorescent Hill covering some behind the scene details regarding this digital masterpiece.