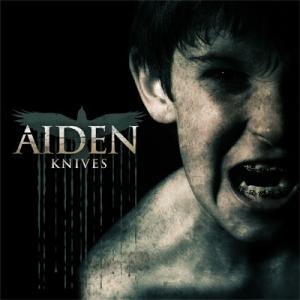 Jesus Christ. Look, I’m not saying that Aiden are the worst band in the world. But you know that feeling you get when you see a 13 year old boy trying to be rebellious by wearing a lot of black and swearing in a really unconvincing manner, claiming that he’s angry at the whole entire world and is gonna, like, break stuff? That feeling of pure, irrepressible disgust and expasperation? Imagine if the 13 year old boy wasn’t, in fact, 13 years old: rather, he’s 27 years old, and prone to acting like a petulant teenage girl in the middle of a strop if he doesn’t get his way. That’s what Aiden’s Knives is like – just a big, immature hissy fit, playing itself off as some sort of music.

And now imagine that the kid’s name is William Francis, but he calls himself “wiL”. Seriously.

I realise that sounds a lot like a mid-20th Century quinquagenarian proclaiming rock n’ roll to be the devil’s music; it sounds like I’m just too old and embittered to understand why these kids are so angry at the man, man! But no, I’m 21, prone to listening to a good amount of loud guitar music – and I can honestly say, with my hand on my heart and the best of intentions: Stop it Aiden. You’re embarrassing yourselves, and everyone around you. Just stop.

I’ll give Aiden the benefit of the doubt. Angry music is hard to pull off in any sort of respectable manner without looking like colossal, whiny tits. Slayer made a career out of looking like colossal, whiny tits, so it’s not like Aiden are alone in their dismal situation. It’s just that when people scream about how the world sucks, to a generic metal backing, it tends to come across as, well… kinda pathetic and annoying. Yes, you’re angry – but do you have to inflict such soulless, angsty vomit-rock on us as your means of expressing it? Can’t you just suppress it for years, and then  passive-aggressively take it out on your loved ones like the rest of us?

Apparently not. Instead, Aiden see fit to air all sorts of adolescent anger on Knives, apparently rather fancying themselves as a kind of epic, filmic band – dialogue samples from The 25th Hour and The Devil’s Advocate spill out across songs with relatively little context. The sample from The 25th Hour seems to have been chosen simply based on its tendency to use a certain four-letter word, and the Devil’s Advocate clip… well, I’ll talk about that later.

So yes, Aiden are pretty ticked off at someone. In the most generic, bland, predictable way, of course – so cue lots of pseudo-aggressive-but-actually-hilarious song names. “Killing Machine”; “Scavengers of the Damned”; “Excommunicate”. It’s like reading the diary of a 15 year old Ed Gein right after his first girlfriend dumped him. Fittingly, all of this plays out to a cavalcade of cookie-cutter guitar riffs and drum rolls that fumble around in the background like awkward teenage lovers who know what goes where, but not when, or why, or how. For all the teenage insecurity and angst “wiL” mutters on about, the music does a far more capable job of reproducing those feelings of youthful shame and humiliation, just by being pretty awkward and shameful.

Of course, “wiL” does mutter on, and boy howdy, are you in for a treat with these lyrics. The aforementioned “Scavengers of the Damned” contains such utterly unique and original gems as “Death has come to set us free”, and “It’s up to me to make you f***ing bleed”. The album’s positively strewn with this kind of lyrical mastery: “Carve a message in my arm/ in candlelight, sew it up with hate”… “I’m f***ing sick, don’t take me”. If John Lennon’s lyrics sheets get framed and displayed in exhibitions, this lyrics sheet would probably get used to mop up a nosebleed the janitor at that exhibition might have.

All of which is nothing compared to the drubbing deserved by the utterly woeful, inexcusable “Crusifiction”. Work with me here, because I’m as atheistic as they come, and have no ideological objection to this song. It’s not like I’m sitting here nursing a Bible, crying because Aiden are *GASPSHOCKHORROR* singing about how awful religion is. Like it’s something shocking and new or dangerous. Opening with dialogue from The Devil’s Advocate, it culminates in the startlingly insightful chorus, “F*** your god, f*** your faith, in the end, there’s no religion.” Well, quite: that’s the whole world convinced, then. You don’t sound ridiculous at all.

Of course, it wouldn’t be nearly as bad if “wiL” didn’t feel the need to bellow “I am the devil!” during the bridge. Honestly, son, get a grip.

Knives is filled to the brim with that kind of misplaced rage and pubescent sweary-rebellion that longs to be offensive, but it’s so laughable even a busload of nuns would have a hard time getting worked up about it. Just to get across quite how hilariously over-the-top “wiL’s” anger is, I’ll give you a tiny sample of an open letter to Apple Software he posted on the Aiden website.

So what if a crappy punk band from Seattle sings about the deception of religion as a whole? So what if they sing about Catholic priests molesting little boys? Who really cares at all if they wail about a Hungarian Countess that was born in the 1500’s and killed over 600 women? Who Cares? The PMRC? Ted Haggard? Congress? Jesus? Oh wait, no… JESUS ISN’T FUCKING REAL.

Haha! You showed them!