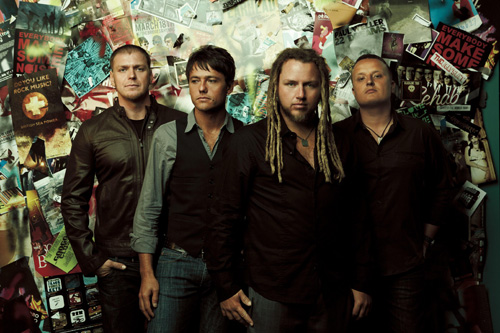 Comprised of Ard Matthews (guitar, vocals), Brent Harris (drums), Denholm Harding (bass, vocals) and Sandy Chila (guitar), Just Jinjer is the biggest thing that ever happened to the South African rock scene, which, upon their arrival, was totally revolutionized and brought to contemporary standards.

The band has sold hundreds of  thousands of records in their homeland, earning them multi platinum status, and managed to play alongside such acts like U2, Crash Test Dummies, Toto, Elvis Costello and co-headlined with Hootie and the Blowfish, Skunk Anansie, Stevie Wonder, Spice Girls, Chaka Khan and many more. South Africa is too little of a place for such a big band, though.

So it has that Just Jinjer moved to California, where they got singed by Curb Records and recently recorded a new three track EP, now available on most major digital retailers, titled “Can I Have More.” Their sound is warm, both musically and lyrically, packed with mid-tempos and catchy hooks.

Keep on eye on these fellas. It wouldn’t really come as a surprise if they’d make it big on the Billboard chart…

Fan made video for Can I Have More.

More info and streams at the band’s myspace page.