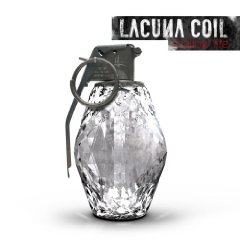 The first thing that has to be said about this album is they’ve worked with producer Don Gilmore, who also teamed up with Good Charlotte, Avril Lavigne and Linkin Park, so at first I was thinking this album is going to be poppish and more mainstream. I was right. I also remember an interview Cristina Scabbia did with Blabbermouth in which she said the point of this album was to speak out to more people than before and to be more to the point, and that’s what they did. It’s the peak of the natural transition they’ve been going through in the past few years but it’s NOT a concept album (as far as I’m concerned) in its true meaning, as most tunes allude to the shallowness of life instead of pointing at it and choosing it as a theme. It’s the same Lacuna Coil we know and love, but they just show a whole lot of some sides of them and not that much of other sides.

That being said, the album’s main theme is quite poppy; all the emphasis is on the chorus, and there are some great hooks there, as Cristina sounds as amazing as ever, being able to transform an OK song into a great one. Perhaps that’s the reason why Andrea Ferro’s vocal contribution seems to be useless sometimes and the musical duels the two have become redundant pretty fast. He seems to have progressed a bit, but I’m positive that’s just the better production work. The overproduction also amplifies the redundance, giving the album a pretty flat and repetitive sound (I’m sure there’s at least a handful of songs that’ll sound better live). There are no memorable solos or other lead work on this album, despite some really catchy tunes, especially the single, ‘Spellbound‘. I listened to the single before the album, and I was thrilled thinking that it was the radio friendly tune and all the others are going to be heavier or more ‘gothic‘, but I was (as many long standing fans will surely be) dissapointed by the way they approached this album.

Some claim it’s a concept album because ‘Shallow life‘ delves into, as you could guess into superficiality, both in the celebrity world and concerning life in general. ‘Shallow life‘ (the track) is very enjoyable in an Evanescence kinda way, and despite quite some ambiguous lyrics the message is easy to understand due to the title. Chorus: Shallow life/I’ll stay close to the ground/Shallow life/The walls keep falling down. ‘The Maze’, another track that stands out sports a pretty similar chorus: In this maze/I’m running through the halls of emptiness/In this maze/I can’t find the way to get back to the end; call me an idiot but ‘barely carrying out every day’ is not about shallowness. It seems they wanted to make it clear that this is a concept album, but considering its title, I’d say Lacuna Coil should what they preach, as the writing seems pretty shabby and the arabic influences, as interesting as they are, are not enough to make it seem less redundant, and idiots such as myself could understand that this ain’t a concept album.

As I see it all in all, most songs are just basic power chord progressions harmonized in a very surprising and pleasant way by Cristina Scabbia that makes all the difference here. It’s without a doubt the album that will launch Lacuna Coil in the mainstream pop/metal (or whatever you kids call it) scene and make them the idols of many many excited 16 year olds, but I doubt many people will remember this album in years to come, and they’re gonna have some pissed of long standing fans. It’s a bloody good album, but I was expecting so much more from them, cause I already knew what a fantastic vocalist they’ve got and how good they can be. Also, here’s the video for Spellbound. Still, there’s something so very haunting about her that just can’t be boring, no matter what, she’s just hypnotic. Anyway, I hope the next album is gonna be a fuckin dark piece of art and all is forgiven,fingers crossed to that.