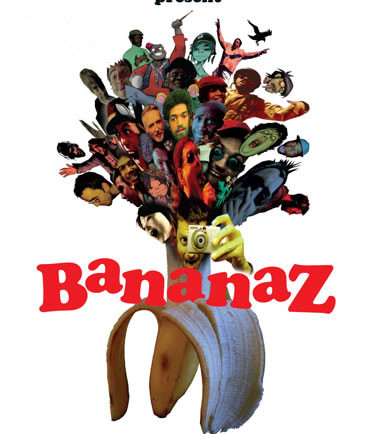 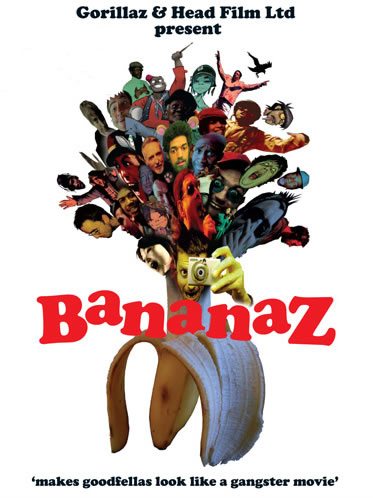 There’s no doubt to anyone that a shroud of mystery has always been around Gorillaz, the most successful virtual band in history, which is quite funny since they’re a lot better than most real bands out there today.

Behind the animated project stand two people: Jamie Hewlett, the man who designed the whole band (Russel, Noodle, 2D and Murdoc), also famous for co-writing the comic book Tank Girl, and the highly talented Damon Albarn, the only permanent musician of the project. If the name sounds familiar, know that Damon is also the frontman for one of England’s most successful bands in recent history, Blur.

Anyway, film director Ceri Levy (who also directed Blur’s 1994 documentary Starshaped)  followed the ‘band’ around for a few years in an attempt to reveal to the world the true faces of Gorillaz. This is how the documentary “Bananaz” was born, and boy does it rock!

The documentary premiered today at Babelgum, where it will remain available for free, integral viewing for the next 30 days. After that you’ll only be able to see it in theathers and on the EMI soon to be released DVD (and torrents ofc).

A short description of the pic:

This incredible film, “Bananaz” removes the secretive, mucky walls of Gorillaz, the cartoon band created by artist Jamie Hewlett & musician Damon Albarn, smashing down all artificial barriers to reveal the full and filthy details behind this awe-inspiring band. Audiences see just what director Ceri Levy saw over seven years of mayhemical creative madness… a lot of it too graphic for mortal eyes to behold…Bananaz is Levy’s story of the partnership & community behind Gorillaz. He takes you into the studio and out onto the road with this virtual phenomenon, showing a part of Gorillaz never seen before – reality. As one radio interviewer puts it, “It’s a parallel universe – these guys aren’t in the band but they know the animated characters who are”. Bananaz is an honest, often hilarious account of the working relationship between Albarn & Hewlett, and the rise to success with Gorillaz – from the initial embryonic conception through to global domination. Also in focus are many of the conspirators & collaborators that came along for the ride, including Dennis Hopper, De la Soul, D12, Ibrahim Ferrer, Bootie Brown, Dangermouse & more. Contains strong language. WARNING: Some footage in this film includes a strobing effect, which may affect viewers with photo-sensitive epilepsy and other such conditions.

Once again, don’t miss the chance and check out the documentary down at Babelgum.