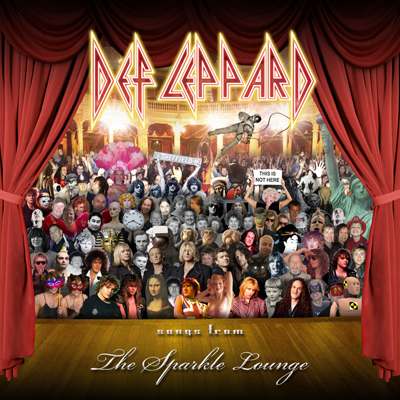 Things are definetly heating up around Def Leppard, as they have already released the artwork for their new album, “Songs From The Sparkle Lounge”. This is going to be their 14th (!) album, and promises a lot already. It’s set for April 29, containing 11 new songs.

I found out how the cover for the album is going to look after reading the folowing statement, which appeared on the band’s official website:

“After previously presenting two ‘teaser’ covers (one with just the band logo and album title font, and one with a closed theatre curtain), we can now finally reveal what is behind the curtain and show you the final artwork for Def Leppard’s new album ‘Songs From The Sparkle Lounge’.

“As you can see, the band went for a cover in the style of The Beatles’ ‘Sgt. Pepper’s Lonely Hearts Club Band’ by using a collage of photos of various people who have a connection with the band in one way or another. Apart from a number of pictures of the band members themselves (throughout the years), you’ll find their parents, crew members, friends, and some artwork characters from the past.”

The foundation for the album’s collaboration with country music superstar Tim McGraw was layed at Def Leppard’s 2006 Hollywood Bowl show and it made an instant hit, being unexpectedly well received by their fans, and the most awaited song is “Nine Lives”, performed with him.