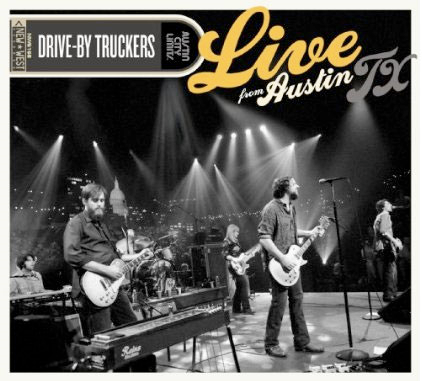 In the spirit of full disclosure, I should probably inform you of two things:

1 – I’m a hard marker. In the time I’m writing for this website, you’ll likely never see me give an album 10/10. This is partly because I don’t think you could reasonably call any album absolutely perfect, but mostly because I’m a qualified miserablist who is dead to joy. So an album that gets a high mark, but fails to hit the zenith, probably only falls short on the basis that I’m hideously cynical.

2 – The Drive-By Truckers are the closest thing I have to a favourite band. I don’t think Mike Cooley has ever written a song that was anything less than excellent, and they remain the only band that I’ve travelled beyond Dublin to see (I saw them in Manchester last August). So I’m not going to pretend this review isn’t somewhat biased. Rest assured however, that the Truckers have earned that bias by releasing five of the best rock albums of this young milennium – one of which was a double album, and another that was long enough to be one.

So it’s with the utmost confidence, and with as much critical distance as I can muster up, that I tell you this is a truly fantastic live album. The reason I say this can be handily summed up by this sentence: The Drive-By Truckers are the finest live band rock n’ roll can lay claim to right now. They say three is the magic number? The Truckers have three songwriters, three lead singers and three great guitarists. They couldn’t fail to be brilliant. (Unless, like me, you don’t believe in magic, in which case, feel free to attribute their brilliance to an abundance of talent and intelligence, which is probably more accurate anyway.)

DBT shows have gained a reputation as being raucous, boozy, rollicking affairs, and rightfully so. But Live From Austin TX filmed for a traditionally country music-based American TV show, and therefore is – probably necessarily – a little tamer. Which isn’t to say that the Truckers don’t raise some hell, because they rock loud and rock hard for the vast majority of this shortened set. Just not as much as you might initually expect.

Instead, they ease in with some acoustic songs – a combination of Mike Cooley’s “Perfect Timing” and Patterson Hood’s “Heathens” – before going electric for my personal song of 2008, “A Ghost To Most”. And the acoustic songs are wonderful: Cooley and Hood are masterful songwriters and storytellers, and while that sometimes gets lost behind the duelling guitar solos, those attributes are front and centre on this album.

Rest assured, though – when the Truckers get loud, they get fantastically loud. The greasy slide licks that John Neff lays over the gritty “Three Dimes Down” are wonderful – almost as wonderful as Cooley’s frankly incredible, often hilarious lyrics. “Puttin’ People On The Moon”, Hood’s  moody, swampy rocker off The Dirty South, is turned into a distorted rave-up, seething with anger.

The highlight, however, comes towards the end of the set, with “The Living Bubba”. Hood quietens things down, and tells the audience a story of an AIDS-infected guitar player from Georgia who stubbornly played over a hundred shows in his last year, refusing to let the disease kill him before he was ready to go. The pre-amble has become a part of the song over the years (similar to the story that’s told before the heartwarming “18 Wheels of Love”) but it adds a certain context to the cut that’s somehow chilling and life-affirming all at once. The fact that it’s tied to the best song Hood has written (in his own opinion and mine) is just a bonus. And when you consider that the next song is “Zip City”, the quintessential Cooley tune – “You say you’re tired of me taking you for granted… And ‘for granted’ is a mighty big word for a country girl like you” – you start to realise just how special this band can be.

They finish strong, with the loving paean to rock n’ roll “Let There Be Rock” and a one-song encore of “Marry Me” (sample lyric: “Rock n’ roll means well, but it can’t help telling young boys lies”). It’s a sadly short, 13-song set that doesn’t quite capture the unpredictable, ear-splittingly loud nature of a regular DBT show, but what it does capture is a band that have as much, if not far more, to offer as any rock band walking the earth right now. They can be boisterous, fierce or tender, and this documents that as convincingly as any of their studio albums.

There have been regrettably few jokes in this review, so, bonus punchline: “Drive-By Trucker? I hardly know ‘er!”

7 – Puttin’ People On The Moon