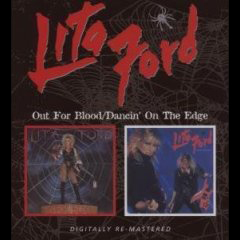 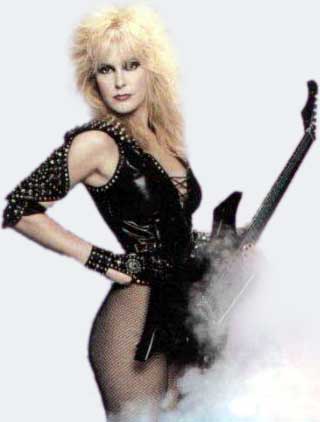 The people at BGO (Beat Goes On) records recently re-mastered Lita Ford’s first two releases and stuck them on one disc. Those who like what she sings probably had them recorded to some cassette. Dancin’ On the Edge is the epitome of what all other female rockers should strive for in an album. The track Dancin on the Edge keeps the fast pace moving along. Run with the $” and “Hit and Run” are Loverboy-style rock, not quite metal yet too hard for pop. Much of the other selections are in this same vein.

Her first album, Out for Blood

, does sound a bit like Ford’s previous band the Runaways and the sound is amateurish sometimes as they try to find the hard rock undertones reaching to establish a style. It is lively and energetic and that makes the album noticeable. The real prize here is Dancin’ on the Edge

(originally released in 1984) which made Lita go in that hard rock direction.

The production values are much stronger than the debut with a more professional sound. There is also some vocal improvement and she finds a bit of her own guitar style. The sound is much like what Ratt or [tag]KISS[/tag] were doing at the same time. What makes the album is that the band manages to keep the songs interesting by having new riffs and making the album is that they interjected many new riffs which makes the tracks not be so repetitious. That is a trap that too many hard rock artists fell into.

So you probably have heard some of the tracks or at least you should have. There are some which stand out but most are just nice to listen to. This version is re-mastered and it sounds nice. There are no bonus tracks, but there is a thick booklet with some history about what Lita Ford did between the end of the Runaways and when she finally did these these two albums. Out for blood are tracks 1-10 the other are from Dancin’ on the edge.
ZMErating: 8/10