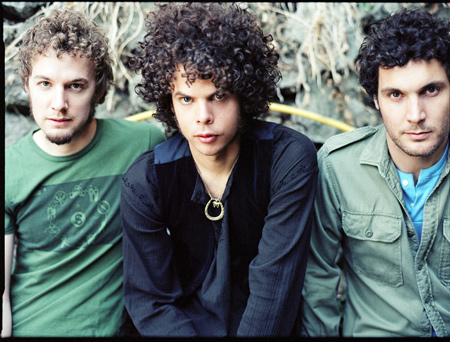 Today is a sad day for Wolfmother fans around the world. A few hours ago the Aussie three piece band just announced on their myspace blog, that Chris Ross (bass/keyboard) and Myles Heskett (drums) have departed Wolfmother, leaving guitarist/frontman Andrew Stockdale for the lonely wolf. Here’s how the post went on.

Singer/guitarist Andrew Stockdale now plans to find other musicians over coming months and to then begin making a new Wolfmother album.

Wolfmother toured the world virtually non-stop through 2006 and early 2007 on the back of their acclaimed self titled debut album. Longstanding frictions within the group then lead them to take an extended break during the second half of 2007 to consider their future.

In early 2008 they regrouped and worked on new material. Initially encouraged by those sessions, they committed to a handful of live shows to ‘road test’ the new songs and to try to find a way forward.

Those dates concluded with a headlining slot last Sunday at the Splendour In The Grass Festival in Australia’s Byron Bay where rumours circulated about possible lineup changes.

Following that show Chris Ross decided to announce that he was leaving the band due to irreconcilable personal and musical differences. Myles Heskett has also decided to leave the band rather than continuing as part of a changed lineup. The pair has been working together on songs for some time and they plan to focus their energies on that new project in the future.

Wolfmother’s self titled debut album is one of the most successful Australian rock releases this century. It has sold over 1.3 million copies and received multiple ARIA Awards and a Grammy – making them the first Aussie band to receive such an award in 25 years. Other highlights for the group have included appearances at just about every major music festival in the world, sharing stages with Pearl Jam, The Who and The Strokes, and a special performance inducting the legendary Led Zeppelin into the UK’s Rock’n’Roll Hall of Fame.

Andrew Stockdale, Myles Heskett and Chris Ross will make no public statements at this time except to say that they are each really looking forward to making their new music over the years ahead.

In the meantime they simply ask all Wolfmother fans to please understand that in spite of their best efforts over a long period of time, they just could not find a harmonious way to work together and that has lead to the decisions announced today.

That last paragraph really got me going, though. “They just could not find a harmonious way to work together.” What a load of bull… Anyway, we hope Andrew can round up some decent fellows and get back to work on that follow-up album we’ve all been waiting for.