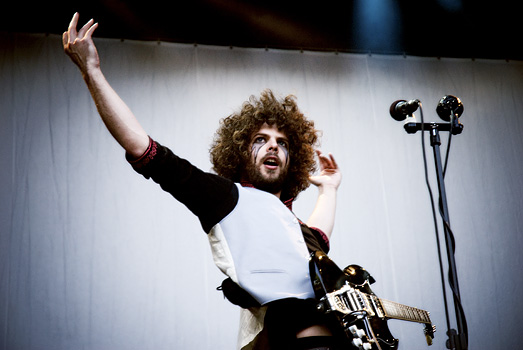 Photo by Kai-Otto Melau
A rare and recent media engagement from Wolfmother frontman Andrew Stockdale has brought news of a second album. With their eyes set on a September release, the recently reformed Australian outfit has reportedly been laying down tracks in a L.A. studio, with three new members to replace Chris Moss and Myles Heskett.

And a bit of respect must be given to the singer. For so long the lone wolf , he managed to get the band up and running again (after Moss and Heskett ran off to form their short-lived Doom Buggy). Now his patient fans are poised to reap the benefits of new material. And they will also be pleased to know that the new songs are supposedly in keeping with the style of Wolfmother’s debut (although more “magnified”) as they were composed before the original line up parted ways.

The group road-tested a few numbers around Australia – performing under the name of ‘White Feather’ – and gave ‘Back Round’ (due to be the first single) an outing at the MTV Australian Music Awards in March.

They left the day after the ceremony for the L.A. studio, where Stockdale has kept fans up to date with his recent foray into the world of Twitter. So far his messages have been a rundown of the album’s progress, with updates like, “Onto the 9th song tracking drums, looks like this will be a double album spectacular. Yes!” keeping fans on edge. He has also been posting some interesting song titles, such as ‘The Violence of the Sun’ and ‘Pilgrim’.

With early predictions of a release date a good five months away, any name for the album would be presumed to be a bit premature, although the singer did reveal that it was going to be called ‘Cosmic Egg’ (after a position he picked up in Yoga class). You would be hard pushed to find a better example of a ‘working title’, but let’s hope it sticks.