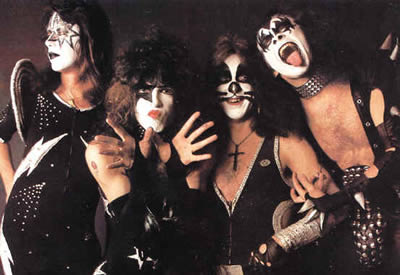 I was just scanning through Blabbermouth, a few moments ago, when I stumbled across a post, that just made go all WTF?! Apparently, during a more or less familiar interview for Norway’s NRK, the KISS bassist/vocalist Gene Simmons confirmed that him, as well as co-founder Paul Stanley will retire from the band, then jokingly or not, he confessed he’s planning to keep the band alive forever. It seems it’s all part of a diabolical master plan, forged by Gene and the band’s longtime manager Doc McGhee, to find four replacements for the NEW KISS. Again, WTF!?

This doesn’t stop here either, when asked if the new band selection would be a reality show, like American Idol or Rock Star, Gene replied “The answer is yes. The deal has just been signed. It’s coming soon.”

In a separate interview, Stanley was apparently not very happy to hear about his bandmate’s statement regarding KISS’ future.

“There is no signed deal,” Stanley said. “Again, when we are both aked the same question sometimes, you get different answers,” Stanley added, “What will happen, we’ll see as we go along. But is something going to happen next week? Is something signed? No. But am I opposed to the idea of going out and trying to find new KISS members through the television? Of course not.”

Bellow you can see a one and a half minute video, part of a one hour long special set to air in September on NRK, in which you’ll be able to watch the exact KISS members statements, that I’ve been talking about. Worth noting is the fact that something similar was planned for Velvet Revolver as well, after they lost their vocalist, Scott Weiland, at the end of spring, but luckily Slash thought that “wasn’t Cool”. Glad to head there’s still some brains left in the music industry. This is for you, guys.