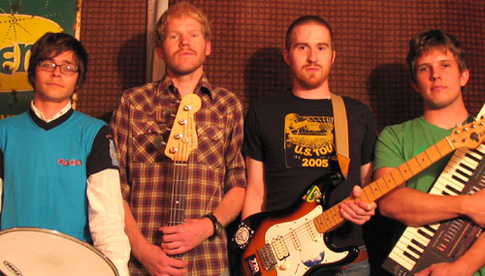 The Minneapolis based Tapes ‘n Tapes created a whirlwind in the indie community, back in 2006, with their critical acclaimed debut record The Loon, that brought them comparisons with the likes of Pixies and Pavement. Now, at their sophomore release, titled “Walk It Off,” the band plan to live up to their growing fan base expectations and deliver from all points of view. “Hang Them All,” the first single, has recently been released as a free download by the band’s label and at a glance I’m very pleased with it. It’s incredibly catchy and has some great hooks, that made them so rapidly popular. On a further inspection, however, I get hit with a deja-vu. The thing is Hang Them All seems to me like something that could’ve come out off The Loon and although that certainly doesn’t mean it’s a bad thing, it also isn’t a good thing either. I would’ve enjoyed something with a fresher vibe, but nevertheless it’s good to hear new music from the Tapes ‘n Tapes once again. Walk It Off gets out April 8 via XL Recordings.